2014 has seen unprecedented Kyrgyz-Tajik conflict, including the first ever exchange of fire between Kyrgyz and Tajik government troops. In all, the Kyrgyz Ministry of Defence has recorded some 35 conflicts in 2014, with numerous deaths and dozens of serious injuries.

Kyrgyz and Tajik citizens hurl rocks at one another in Batken Province, Kyrgyz Republic. 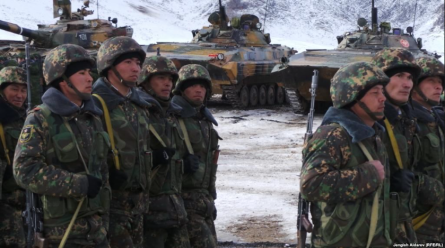 For more on the history of the Kyrgyz-Tajik border and its present-day conflicts, click on the map above to see “Radical Transformations – A History of the Border in Maps.”

Half of the Kyrgyz and Tajik Republics’ 976-kilometer border is un-demarcated, meaning that the two countries bleed into one another at the frontier. This wasn’t much of a problem when they were both part of the USSR. Cars, goods and people criss-crossed the hazy boundary with little care or implication. Meanwhile, Soviet authorities had little interest in defining the border: we’re all one soviet union, they reasoned, so why prompt inter-republic, inter-ethnic squabbling by forcing a final demarcation? And so the contested, tricky spans of the border remained undrawn.

When independence came in 1991, the Tajik and Kyrgyz SSRs became separate and independent nation-states – each with its own government, citizenry and (ostensibly) political boundary. Kyrgyzstan ended up with a massive Tajik enclave, called Vorukh, slicing its southernmost province in half, and some 500+ kilometres of undefined frontier zone with Tajikistan. Within this zone, what land is Kyrgyzstan’s and what land is Tajikistan’s is now often defined by the ethnicity of its owner rather than an independent territorial basis. Pastures, forests, rivers and canals exist in a nether-world of unclear national ownership. Conflict is frequent, as Tajik and Kyrgyz farmers and shepherds attempt to make a living off of shared water, land and pasture with little basis for individual claim or use. 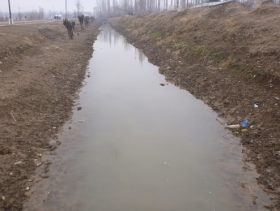 Fighting over water from irrigation canals such as this one is a common source of Kyrgyz-Tajik conflict.

In August, Tajiks tried to tear down a bridge with this excavator. Intervening Kyrgyz and Tajik border guards began a shoot-out. 5 were injured. 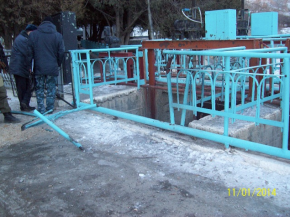 This irrigation facility was the site of the first Kyrgyz-Tajik conflict of the year, on January 11, 2014.

Fighting this year has centered on Kyrgyz construction of a road to bypass the Tajik enclave. It has also, according to one Kyrgyz military leader, been caused by the Kyrgyz government’s crack-down on corruption. The porous frontier is a major thoroughfare for drugs from Afghanistan plus smuggled weapons, raw materials and people destined for slave labor. The trade is facilitated by pay-offs to border guards on both sides. Increased pressure from Bishkek to stem corruption is allegedly turning this once well-oiled machine into a friction point. Locals living on the border are paying the price.

This map charts major border incidents from 2014 to the present, including some selected Uzbek-Kyrgyz conflicts. For a list of major conflicts and Kyrgyz legal proposals related to them, click on the white, grey-striped icon in the upper left corner of the map.

One response to “The Border Conflict”