Central Asia has undergone radical socio-political change in the past 200 years, morphing from a land of tributary khanates, to a group of loosely ruled colonies of the Russian Empire, to ethno-national republics of the USSR to a series of independent nation-states. In the process, areas of once unbounded territory have been repeatedly re-bordered and re-populated. Today’s independent Central Asian states have inherited this legacy for good and for bad, with ethnically and linguistically rich populations struggling to define themselves, their place in history and their identity for the future. These maps give a rough sense of the radical geo-political transformations that underlie these struggles. 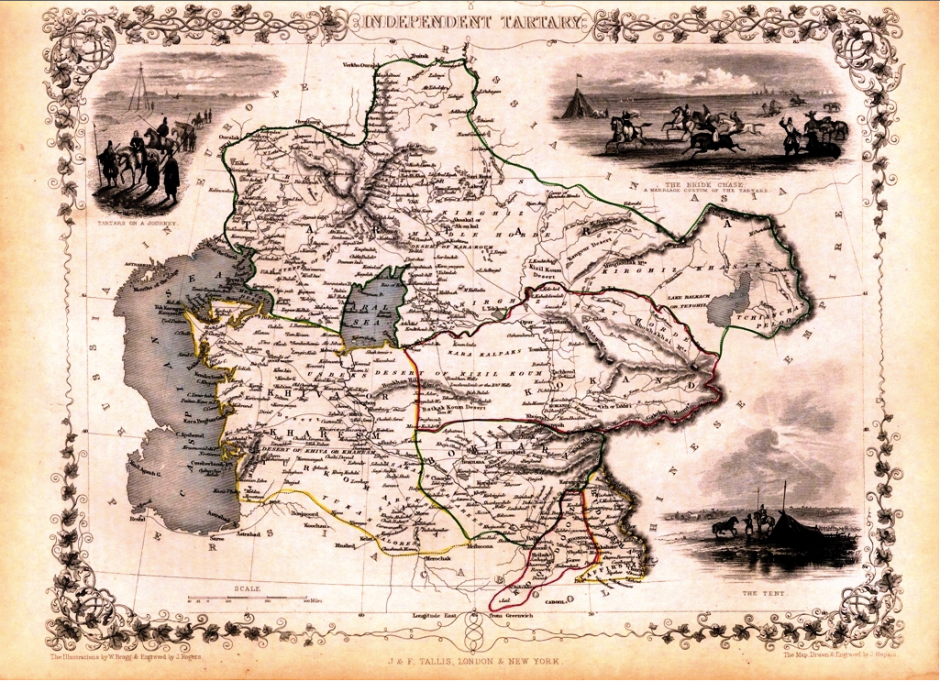 A British map of “Independent Tartary” – Central Asia before it was colonised by the Russian Empire. The areas labeled Kokand and Bokhara in the lower right cover much of what is now the Kyrgyz and Tajik Republics. As the map reflects, the territory was divided into several multi-ethnic Khanates. The Khanates’ boundaries, though roughly stable, were defined by who paid tribute to which khan rather than by strictly ethnic or territorial factors. These borders would shift as nomadic populations rotated across pastures, as farmers resettled, as political alliances shifted and as new conquests were made. The ethnic categories that are the basis for today’s Central Asian borders – “Uzbek,” “Kazakh,” “Tajik,” “Kyrgyz” – were only loosely conceptualised during this time; it was only after Russian colonisation from the 1860’s onwards that ethnic categories came to have true political meaning. Russian administrators used them to simplify and govern what was otherwise an extremely complex socio-economic system of identity grounded in nomadic vs. settled lifestyles, Turkic vs. Persian ancestry, religious affiliations and linguistic capabilities. 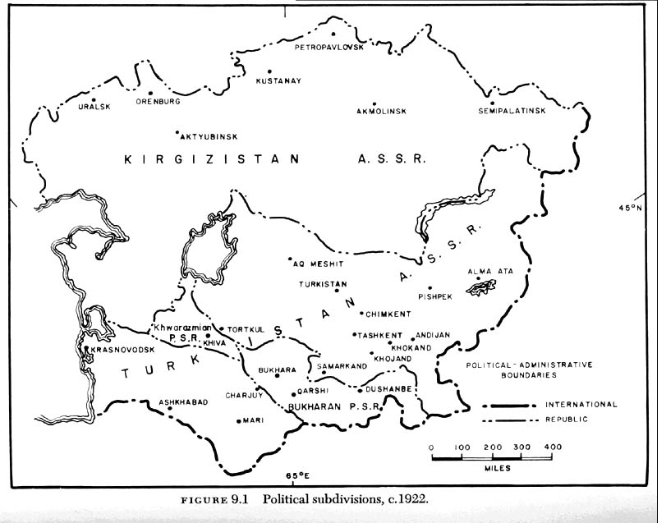 With the Russian Revolution of 1917, the Russian Empire’s Central Asian territories passed to the new communist regime. The Bolsheviks initially adopted the Russian Empire’s method of administering Central Asia, dividing it into four loosely-governed districts: the Kirghiz Soviet Socialist Autonomy, roughly covering what is now the northern Kazakh Republic; the Turkistan SSA, roughly covering what is now southern Kazakhstan, Kyrgyzstan, much of Uzbekistan and Turkmenistan; the Bukharan Protectorate, covering what is now Tajikistan and part of Uzbekistan, and the Khivan Protectorate, in what is now part of Uzbekistan/Turkmenistan. The Bukharan and Khivan protectorates were hotbeds of anti-Soviet activity, and thus required special “re-orientation” before being incorporated into the larger Soviet territories. The communist authorities would soon develop their own plan for Central Asian, dividing local populations along ethnic lines in a process known as national territorial delimitation. The committee in charge of these divisions was headed by none other than the young Joseph Stalin. 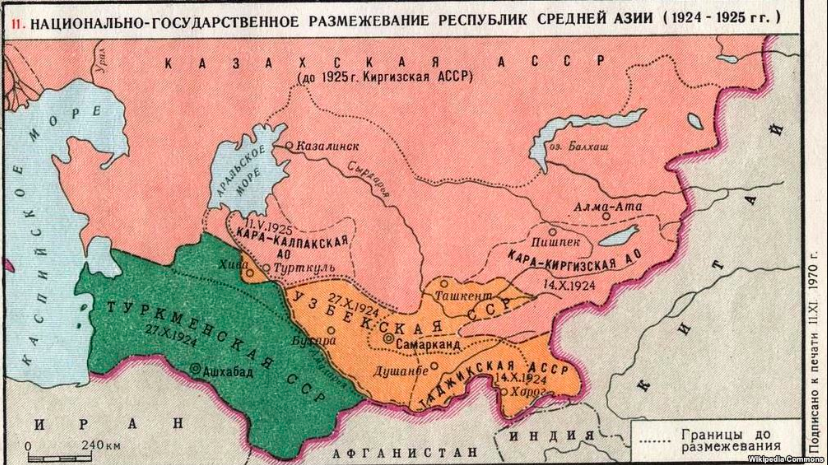 By 1924, Soviet authorities had begun to divide the ex-Khanates into ethno-national republics. In the process, locals were forced to identify with an officially recognised ethnicity (Uzbek, Tajik, Kirghiz, Kara-Kirghiz, etc.) and to resettle to fit into their new, consolidated, ethnically-defined territories. In this map, what is now Tajikistan is part of the Uzbek Soviet Socialist Republic (orange). Tajikistan would become its own soviet socialist republic in 1929, once the Tajik ethnicity was granted full official recognition. What is now Kyrgyzstan and Kazakhstan are here together in red in the above map. The area that would become the Kyrgyz SSR in 1935 is labeled as the “Black Kirghiz SSA,” a sub-province of the Kirghiz SSR…. In a confusing twist of naming, the ethnic group now called ‘Kazakhs’ were called ‘Kirghiz’ under the Russian Empire and early Soviet Union. The now-‘Kyrgyz’ were called ‘black-Kirghiz.’ Soviet authorities re-named the ethnicities in 1935, when the Kirghiz SSR was divided into the Kazakh and Kyrgyz SSRs. 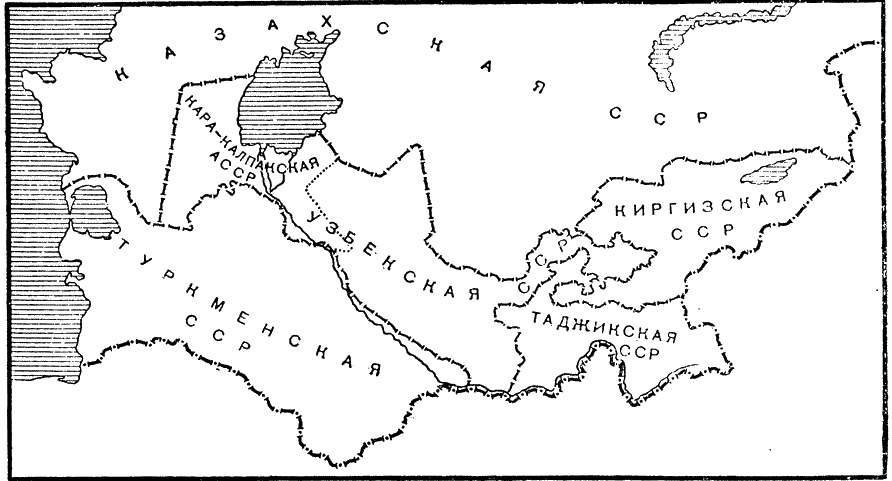 By the late 1930’s, the Kyrgyz and Tajik SSRs existed in roughly the same configuration as today, though with some notable differences: there is no Tajik enclave in the Kyrgyz SSR, and the borders are at best vague. The darkened border line on the map is more fiction that reality: neither republic agreed on where the border would be. Soviet authorities – namely Stalin – put an end to national territorial delimitation by the late 1930’s, leaving such un-demarcated frontiers open and unresolved. The Kyrgyz and Tajik Soviet leadership would meet repeatedly from the 1940’s to 1980’s to try to finalize the border, but to no avail. 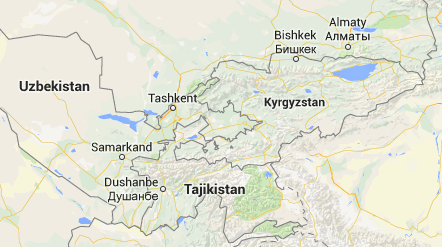 The Kyrgyz and Tajik Republics, 2014.

The boundary between the Kyrgyz and Tajik Republics, as it exists on maps today. Roughly half of the border has never been demarcated, and officials are unable to agree on a basis for resolving their territorial differences. Kyrgyz authorities have argued since the 1940’s that the boundaries should be defined by settlement patterns, i.e. that land predominantly settled by ethnic Kyrgyz should belong to the Kyrgyz Republic. Tajik authorities argue that much of the land settled by Kyrgyz was leased to the Kyrgyz SSR by the Tajik SSR in the 1930’s and 1940’s, and that this leased land must be returned to the Tajik Republic. Kyrgyzstan of course denies this. Documentation of such leases and of early Soviet demarcation attempts is lacking, making it nearly impossible determine which nation has the truth on its side. Kyrgyz and Tajiks continue to live in mixed settlements, further complicating any potential demarcation and raising the stakes of local property use, land sales and infrastructure development.